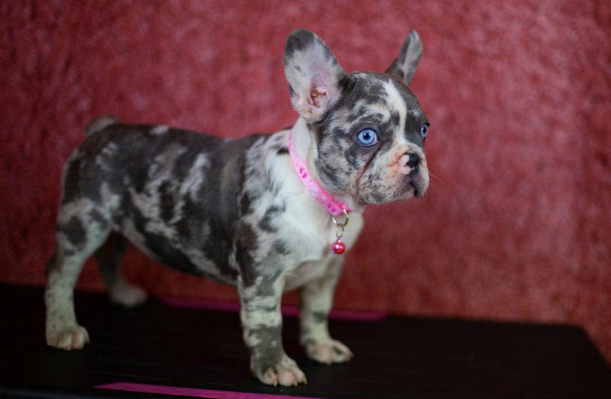 A Frenchie with chihuahua bloodlines crossed with a French bulldog with solid color results in a Merle French Bulldog. As a result, the dog develops the Merle coat pattern, consisting of hundreds of patches and marks throughout the fur coat since some sections of its fur coat are not pigmented. The Merle French Bulldog’s look is more complex.

There is a hereditary component to the beautiful coat display of the Merle French Bulldog. Both the M (Merle pattern) and the m (non-Merle) Mm alleles are present in the DNA of these dogs. It produces a distinctive Merle pattern that gives the dog its lovely appearance. The M alleles also cause the dog’s eyes to have less pigmentation, which causes many Merles to have blue eyes, though this color can vary as the dog ages and becomes an adult. In addition, this gene results in heterochromia iridis, a disorder in which one eye is larger than the other.

If two Merles are let to mate, they may result in a dog with two copies of the MM gene, known as a “Double Merle.” The base color dominates this dog with relatively little melanin and only a few patches of various colors. It makes this dog more susceptible to health issues. Breeders dislike this method and consider it unethical. The unique fur and glitz of owning such dogs were the main reasons Merle French Bulldogs were produced. In recent years, their popularity has increased. These canines are remarkable; you don’t see them walking down the street daily. Let’s address the following query in this article.

Is the breed of Merely French bulldog rare?

Indeed, Merle French Bulldogs are unusual due to the manner in which they are bred. Before breeding these dogs, you must adhere to a set of rules and requirements in several states and areas. Breeding this breed raises ethical questions, and some people are against it because of the breed’s higher incidence of problems.

Due to the factors above, there aren’t many dog breeders who raise these puppies. These fantastic canines can be difficult to find a breeder for; therefore, you must do your research to find one. It’s challenging to observe the distinctive coat pattern, Merle, frequently. The distinctive Merle pattern on the dog’s fur coat is created by the base hue being flecked with stripes of various colors. The dog family’s fur coat pattern is rare and distinctive, and this coat pattern is no exception.

However, the color of the purely French bulldog has become a topic of discussion recently. You can visit the website by clicking on https://bulldogpapa.com/merle-french-bulldog/  to learn more details about it and to visit it.

It’s important to note that Merle coat coloration is not a recognized French Bulldog color variation because it is not present in purebred French Bulldogs. Usually, merle Chihuahuas have been crossed to add the color pattern.

The Merle French Bulldog was created for owners who wanted a Frenchie with style and the potential to put on a magnificent display. The most prevalent and distinctive coat color is Merle. The Frenchie’s base coat’s lighting creates a Merle pattern. As a result, the black patches continue to exist, giving the puppies the Merle trait.

The most prevalent markings on their fur are dark brown or black, and the dominant color is typically a mixture of white, cream, or fawn with dark colors. Their fur can have hundreds of different markings. The Merle must be mated with a French Bulldog and a Frenchie that has already undergone Chihuahua-Chihuahua crossbreeding to achieve its stunning hues. The most expensive and rarest dog breed is the Merle. Due to the high defect rate in the previous ten years, these puppies have been a hot topic of discourse, and as a result, the dog’s dazzling coloration is gradually fading.

Depending on which dominant gene is diluted, there are several shades of merles. Black, Blue, and Lilac are three of the most sought-after shades since they are associated with rare French Bulldogs.

“Black Merle” When the black gene is dominant, French Bulldog results. This pushes out the other coat colors. The dominant gene shines through in the three Frenchie black, tan, and fawn colors, giving the Black Merle its color and moniker.

The hardest-to-find Frenchie is the Lilac Merle, the most uncommon breed. Lilac is a blend of the base coat colors of chocolate and blue. Once more diluted, the lilac color can now be seen through the blue. The Lilac Merle also has light-colored eyes that remain that hue throughout their lives and are the color most likely to cause health issues.

Despite being a black Frenchie, whose base color has been somewhat diluted to give its hair a blue tint, the Blue Merle French Bulldog is typically referred to as a blue-gene dog breed. French Bulldogs with blue-merle coats have distinctive eyes.

The gene required for Merle patterning also carries serious health risks, such as abnormalities in hearing, sight, and blue eyes. The fact is that no French Bulldog possesses the Merle gene, making them a mixed breed. Because of this, we are breeding different breeds, which causes a lot of problems.

There is evidence that there is a 25% possibility of producing Double Merles when a Merle and a Merle are crossed. The prevalence of deformities, hearing loss, blindness, and color dilution alopecia in this breed of Double Merles is 86%. In addition to these flaws, kids are likely to have neurological problems, immunological disorders, severe allergies, and in the worst case, death.

Furthermore, the Blue Merle French Bulldog is renowned for having skin irritation issues that can lead to skin ruptures. The result may be staph infections, which can be fatal. The French Bulldog with Blue Merles has the shortest life expectancy.

Small eyes can develop in one or both eyes and are not always congenital. The reason for this is that the eye sockets or sockets still have nictitating membranes covering them.

The condition in which absence of one or both eyes at birth is anopthalmia. The nictitating membrane may occasionally cover the eyes if produced, but they are too deep in the eye socket.

The condition known as Wandering Eye is a severe form of Microphthalmia. The problem is aided by eye deterioration, and as it becomes worse, the lens starts to liquefy.

This eye issue resembles an eye cleft. Cataracts may occasionally accompany the disease. Numerous accounts of deafness and blindness have been linked to Starburst Pupil, making it the likely deadliest.

Due to their distinctive looks and frequently sky blue or unevenly colored eyes, Merle French Bulldogs have become popular in the past year. This article will answer most of your inquiries regarding Merle French bulldogs and dispel numerous online myths. 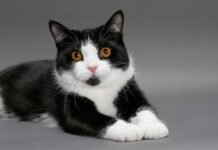 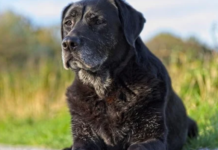 Kennels Are for Older Dogs as Much as They Are for Puppies. Here’s Why. 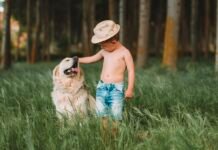